My Morning with the Feds (Fed Jury Duty that is)

My first person account of reporting for Federal Court jury duty......
Oh jury duty, where do I start.  First I wait in the freezing cold to go through the door to stand in line to go through the metal detector. I go through the detector and all the bells and whistles go off.  They ask me if I have a weapon like a knife.  I say "no, I like to think I'm not that dumb"  The Fed Agent kind of chuckles and starts going through my bag - he starts to laugh because I have a regular pair of glasses, a pair of reading glasses, sunglasses and a contact lens case plus 3 lipsticks and two lip balms, gloves, my wallet, a granola bar, Altoids and the book Fahrenheit 451 (my little rebellious moment).  The agent smiles and says "well you certainly will have no issue seeing" and hands me my bag saying he's sorry he had to go through it since I obviously don't have a weapon and maybe it's just too many lipsticks. Yeah buddy I'll 'mark you up' is what I'm thinking.
Then I climb a flight of stairs thinking maybe they'll offer coffee - they don't. I check in with cute Fed guy, give my mileage, well my auto mileage not my personal mileage, and sit and sit and sit in a large cold court room done in Italian Renaissance Revival which really matches the name of the Federal Building - The Edward T. Gignoux U.S. Court - Gignoux is such an Italian name. The building was completed in 1911 and was named in honor of Edward who was a judge - his claim to fame was presiding over the contempt trial of the protesters who attempted to disrupt the DNC in 1968...however I digress; I watch two DVD's about how great I am for showing up for Federal Jury and how important the court system is and I'm so special to be asked to be a fed juror.  Sandra Day O'Connor, Justice Alito and that dude I can't stand - the big hoohaa Supreme Court Justice head honcho said I was special....zzzzzzzzzzzzzzzzzzzzzzz.  The other DVD was obviously recorded in Detroit in 1973...bowwwchickawowwow.....
Then I sit some more. Still no coffee. The judge comes in and tells us that today there will only be choosing for a case that is scheduled to start TODAY and end TODAY....yippee. He then explains what the case is about and how it was a federal crime. Cute Fed guy's computer randomly chooses numbers.  Yippee my number isn't called out of the 20 they call.  But we're told to still pay attention to the questions asked just in case we are needed since some of these jurors will be excused. This is explained twice, in detail both times, about how the process works. I watch a bird swooping down between the two buildings and draw pictures on my note taking piece of paper the cute Fed guy gave me when I walked in.
The judge talks soooo slow and we take two breaks so people can pee (could you not pee during our 15 minute break clown lady and smelly hung over Pat's sweatshirt boy). Still no freaking coffee.
After going though the list of questions everyone who was chosen first who has said "yes" to a question go to sidebar with the judge, court clerks and the attorneys.  This takes FOREVER and I start really wanting to just going PARP, PARP, PARP. (You’ll only know what PARP means if you read Hyperbole and a half). I now can't stop thinking about Occupy Maine and the people sitting in Lincoln Park which is just next door. I bet they have coffee.
Then (this is where I mumble oh fuck) five people are told to go sit with us un-chosen in the cheap seats.  Then my number gets called to side bar so they can ask if I had any "yes" answers.  This is sort of like being on center stage but you get to stand really close in a circle (read...invade my personal space) and talk in whisper into a microphone so the court reporter can keep on doing whatever it is she's doing (probably playing Words w/Friends).  YES!! I get to answer YES to a question - YES MY DAD WAS A COP but not only that he worked with THE FOREST SERVICE and this is a crime involving federal land.  The specifically ask if he was ever involved in fish and game, forest, forest service, forest FIRES, etc etc.....I’m so freakin’ excited I can barely stand it!
YES YES YES - after 30 seconds of discussion I am told I can go back to the un-chosen riffraff area!
A few minutes later I'm set free from the shackles of oppression!!  I get my parking validated and run back to the parking garage!!!
I end up at Trader Joe's essentially spending every penny I made on coffee, special organic food and two buck chuck!!
Justice is very slow. 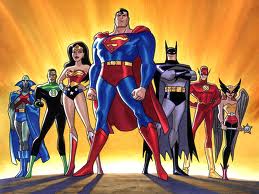 Not even ONE person dressed like they were part of the Justice League.
I was kind of bummed over it.
Posted by Unknown at 2:47 PM