In the last several months I've discovered a couple of things about myself.  1. I really don't like dogs as much as I thought and 2. I HATE BARKING DOGS.

Picture my house.  It's a square in the center of a piece of paper.  Draw another square to the left.  That's neighbor number one.  Number One has a dog named "Charlie".  I now hate the name Charlie.  Charlie is a nervous yapping barker.  He barks the minute his feet hit the ground and barks until he's brought back in the house.  Charlie is let out every morning at 6pm.  CHARLIE barks every morning from 6am until he is let back in around 6:20am.  Sometimes one of his owners comes to the door and yells "CHARLIE BE QUIET".  This doesn't help Charlie one damn bit.  One day Charlie was on a dog run and became so tangled up on his little boys swing set he started freaking out.  It wasn't 6:20 yet so his two adults let him cry and bark.  Charlie is a high pitched barker....oh joy. 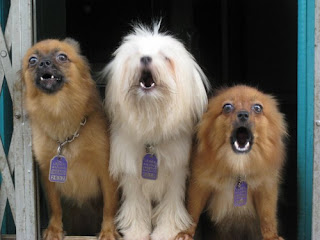 Draw another square to the right of my house.  That's neighbor number two.  Number two has a dog with no name so let's just have fun and call him Dick Face.  Dick Face doesn't go out on a regular basis.  When he does go out he is placed right up against our fence and left to bark uncontrollable at my two little foreign dogs who still (after almost 10 years) do not understand a lick of English.  Dick Face appears to be hard to control.  He is normally dragged from owners truck to to the house.  His appears to be some sort of a Pit Bull breed of dog.  That breed normally doesn't bother me but this dog appears to have the common sense of a brick.  I'm waiting for him to chew through the fence.  He is often left alone during the day in the house where is barks and howls.  My dogs want to kill him.  It can be very loud. He's a grumbling barker...yippee!

Draw another square in front of my house.  Across the street is neighbor number three.  Number three isn't actually a neighbor - she/they technically live on the street adjacent to ours.  They are apartment dog breeders.  They have a lot of little yapping dogs.  We'll call them STFUP's.  The little STFUP's bark 24/7...yap yap yap...yappppyap.  They appear to live in cages next to the house for most of the day.  Sometimes they are put out in a fence area; fenced with chicken wire.  STFUP's spend a lot of time barking but when they're not barking they are trying to jailbreak under the fence.  We cheer them on.  "Come on little fella dig, dig dig!"  We've decided the house must smell just wonderful.  The best estimation we can get is 8 little white dogs, one lady who is always in a housecoat, hair in rollers, stogie hanging between her fingers.  She stands in the driveway and glares at the dogs.  I often think to myself "self - she should be yelling STFUP." She obviously isn't tied into my brainwaves because she never hears me.  We do have a neighbor - no clue who - who does yell STF-UP on  regular basis. He deserves the neighbor of the year award.  The STFUP's are whining and yapping barkers - yay!

Now draw another square approx. two squares behind where you have placed my house.  This is neighbor number four.  Number four is never really seen.  You can here him chop wood and swearing once in a while.  He has a gaggle of dogs.  We'll call them SPAZ.  SPAZ is an infinite number of canine.  I've never seen them but I've heard them.  Think Tasmanian Devil times four, given caffeine and kicked in the butt.  That's what they sound like the three times a day they are let out.  All I know is when they let these dogs out they make their grand-kids come in.  I think "they" ate through the pool they put up last year.  SPAZ is a deep and low barker...hoorah!

I take pills to calm my nerves.  Even our coffee table is wearing a shock collar to keep it from barking.  We gave up putting it on our dog, Zack, who has the propensity to be a barker.  Every time he growled or made his normal speaking noises he ended up falling on the floor.

Never buy a house in suburbia.
Posted by Unknown at 4:02 PM