It rained yesterday in the morning.  It stopped.  It rained yesterday in the afternoon.  It stopped.  It rained last night (down poured actually) and then it stopped.  Do you see a pattern here?  Yesterday it rained 3 times in one day.  Every day has been similar to this one,  It has sprinkled, poured, misted, and damn near typhooned (I know it's not a word but it was more than just a typhoon trust me....and YES I know we don't have typhoons in Maine we have hurricanes but this is my story).  It has been raining and still, raining and breezy, raining and windy.  It has been tree branch breaking water in your shoes crazy.

And it's done this 72 times in the last 27 days.  I have tomatoes that will probably be able to harvest themselves in three weeks. They appear to be growing faces, arms, and legs.  I have bird seed sprouting everywhere.  I have grass growing up to my second floor windows.  OK that's a bit of a hyperbole of the fact but still it's damn high!

I have moss growing off my shoulders.  Or a very odd, should be looked at, skin infection.

We've had sun too.  Tuesday you could have fried an egg on my forehead.  The beach was packed hard.  Pale white tourist and even paler trucker tanned natives.  So damn hot all everyone wanted to do was toss themselves into the cold cold Atlantic.  Then it got dark...and started to RAIN.

We were going camping this weekend.  For me a first since around 1988 and I'm sure I was on some sort of drugs when I said "yeah sure let's go camping".  I am not a camper.  I am a room service let's get pay movies and raid the mini bar kind of girl.  I'm game for a $10.00 Waffle and a tiny glass of juice for breakfast because someone will bring it up to me if I ring down for it.  I am not Miss "Ohhh Let's Pee Outside Like the Bears Do".  But I had an obvious menopausal moment and said (outloud) "let's go camping!" to which I heard "WHAT" so I repeated it "let's go CAMPING!" I really mean it let's go camping it could be fuuuun! 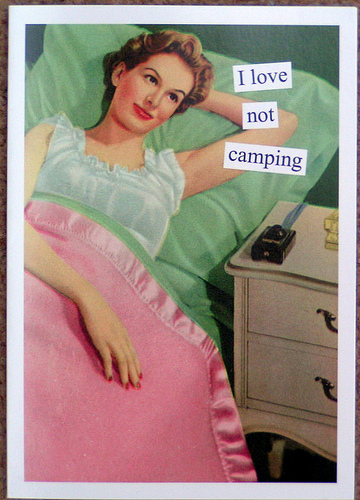 My friends "the We Love Camping Family" were quickly summoned for their expert opinion.  They concluded that I was indeed suffering from some sort of hallucination related malady but they also thought for entertainment value this could be a sight for the ages.  Like Fat Elvis trying to fit in Buff Elvis's black leather pantsuit.  We have been planning for weeks.  I suggested a trial run with just my tribe.  I was told a trial run might be a somewhat bad idea but I won't listen.  I figured I could get my whining out of the way on a quick weekend trip.  Then it started to rain.

There will be no trip until this rain stops.  I am obviously not of my right mind but I will not sit around a tent shivering in wet pants trying to act all chipper in the almost darkness of the woods for two days with my tribe in 72 days worth of rain.

I am not hallucinating enough to make that even remotely happen.

Now I must end because it's thundering.  Which is generally followed by lightening.  Which makes it 73 times  that it has rained this month.

So while it's still raining and you are running out of board games to play take a minute and check out Cut It Off For Kim.  My family would appreciate the support!

We get it. There's rain somewhere in the world. While at the same time cold. Travesty.

And somewhere there is humor and cloudy days too!